The Haguenau TRUMPF factory on the path to Industry 4.0 with robotized welding

The Haguenau plant (Lower Rhine, France) is a key site in the TRUMPF group. It produces the frames for punching and laser cutting machines for all the European assembly sites. Haguenau deploys exemplary continuous improvement and project management practices. In 2016 it launched robotization of welding lines and off-line programming, aiming to increase productivity, improve quality and transition to Industry 4.0.

A strategic site within the group

The Haguenau plant is a unique entity within the TRUMPF group, the world leader in machine tools for sheet metal working, and in industrial lasers (11,000 employees, €2.8 billion net sales). The Haguenau site is dedicated to assembly of frames for punching and laser cutting machines. It supplies all the European assembly sites, and occasionally the USA and China. It follows that the plant is the group’s worldwide skills center for welding and machining these frames. It plays a particularly strategic role since over the last fifteen years there has been a transfer of added value between assembly of the machines and manufacturing of the frame upstream. This is because products are increasingly complex with more options integrated into the chassis, more welding and greater machined surface areas.

“With 140 people, we are a small site within the group, but we play an absolutely key role as the first link in the TRUMPF production line“, sums up Tomas Wolf, Director of the Haguenau plant. The figures speak for themselves: 1,600 frames assembled every year, 10,000 metric tons of steel and 12,000 km of welding wire used, 8 large scale machining centers operating to a precision of a hundredth of a millimeter over a length of up to 12 mm, a level of precision unrivaled in Europe, … Using cut parts supplied by local sub-contractors, the Haguenau plant performs welding, machining and painting. It operates using the just-in-time method without any inventory and delivers its frames to assembly sites in a very short time window. Production is therefore organized in takt-oriented lines.

Automation is the key to continuous improvement of manufacturing

“Development of welding robotization is part and parcel of the process to ensure continuous improvement of our production methods” explains Tomas Wolf. “We have progressed from 25 days in 1994 between the start of welding and shipment of a frame, to 10 days on average, and we are capable of delivering a laser machine frame in 7 days if necessary. These gains have been made possible by improvements in the structure, organization and qualifications of our personnel. Now it is automation that will enable us to become even more competitive“.

A strategic analysis conducted within the factory identified three main reasons to increase automation: replacement of skills that will be lost in the next few years due to the “grey boom”, the need to have a set of machines capable of communicating to enter fully into Industry 4.0, and improvement of quality: automation using robots stabilizes processes and increases the level of standards. 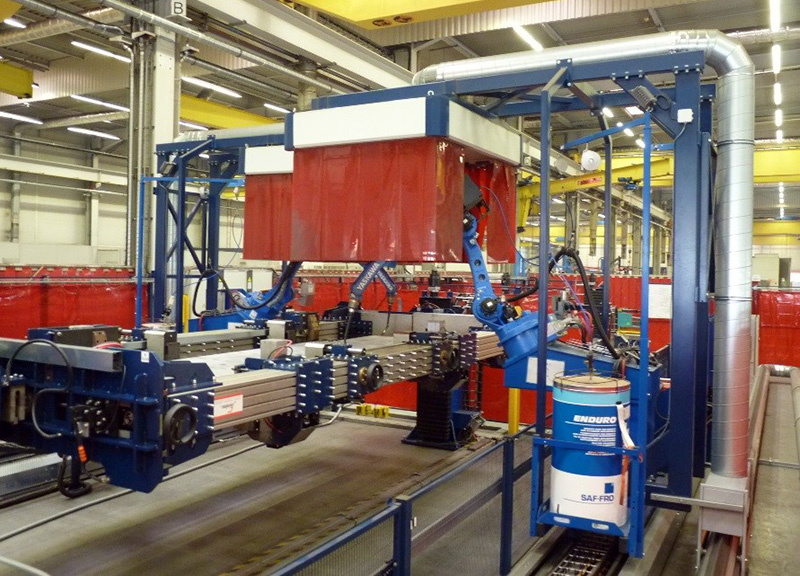 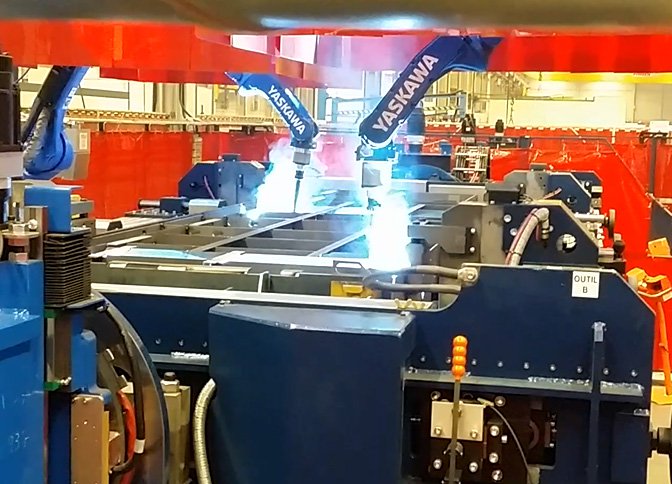 Offline programming of a twin-robot cell

After several years of consideration, the decision to robotize was taken in 2016. The plant invested in a Yaskawa cell consisting of two twin robots each mounted on a linear 13 m axis, working simultaneously. Objective: increase productivity by 50% with the robot on the relevant products, the laser machine frames where the production volume justified the priority being placed on robotization.

Backed up by experience with machining, the choice of off-line programming was obvious from the very beginning. Programming a machining center by teaching takes a long time, does not allow any simulation and penalizes production by immobilizing the machine. The same applies for a welding robot. “For us, programming by teaching is not professional” says Tomas Wolf. “The cell is just a tool, the intelligence is in the program, and for that you need good software“. In addition, offline programming makes it possible to calculate welding times very precisely thanks to simulation. For a cost center, this is essential information that can be communicated to the design office.

Different offline programming software solutions were examined and the project team visited several companies already equipped with such systems, mostly the Alma software. Apart from the solution’s popularity, the main decisive criterion was the software’s ease of use. “We felt the Alma software was very simple to understand and use” explains Tomas Wolf. “And we quickly realized that when it came to customer service, Alma was flexible, open and always available. Their support was highly appreciated and the partnership with Yaskawa was very effective“.

For us, programming by teaching is not professional. The cell is just a tool, the intelligence is in the program, and for that you need good software.

“In order to learn as quickly as possible, we decided to start with the most complex product to weld“, Tomas Wolf continues. “The objective was not to make money straight away or to suddenly switch to robotized welding, because the benefits of robotization have to be measured over the long term. Nevertheless, the project was conducted at a healthy speed: roughly 12 weeks after installing the cell in fall 2016, we were virtually capable of mass-producing our parts.”

Another reason for satisfaction is the way the project was prepared in advance. “We took time to prepare and organize the work, which enabled us to save time in the commissioning phase“, remarks Christophe Seibert, project and investment engineer. Similarly, the different project phases were very well managed: installation, stabilization, and now optimization. 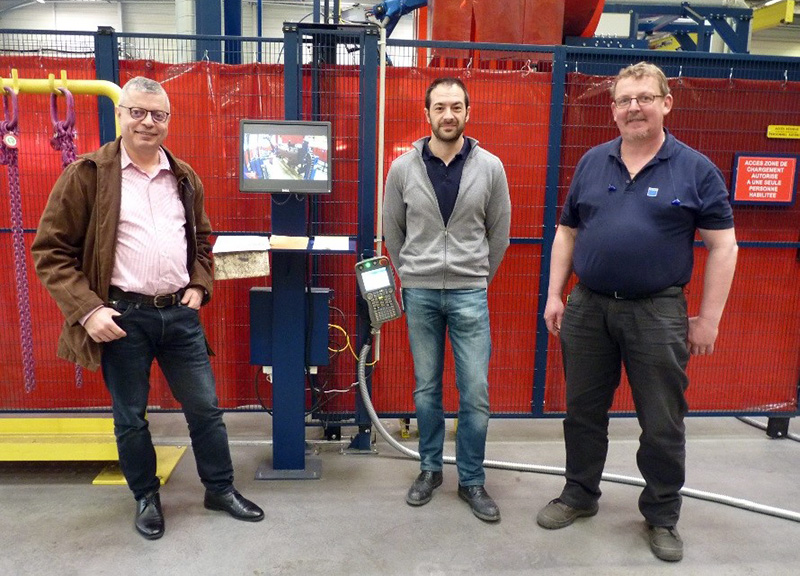 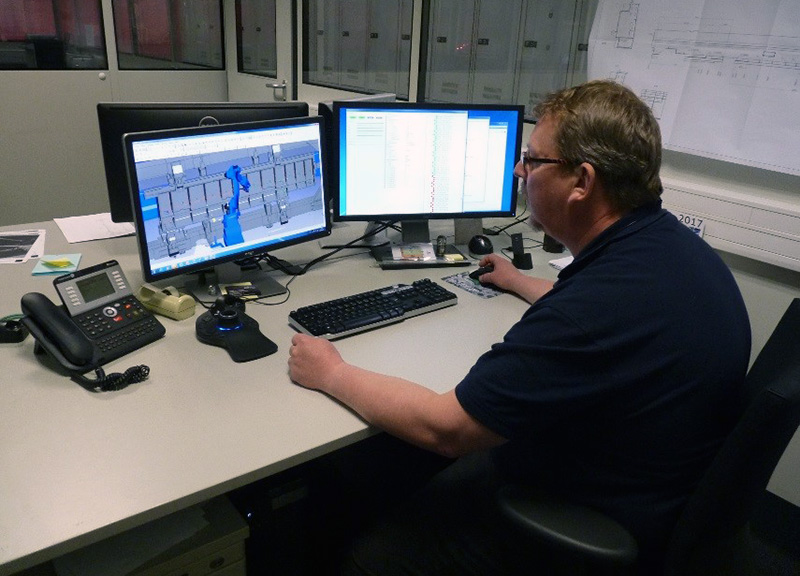 Complex products to assemble and weld

To date, four products have been robotized in the range of laser machine frames. Their specific feature is that they must be welded in two steps. “First we weld the interior of the side-member, then we add a back panel and we weld the exterior in a second pass, representing roughly 500 beads altogether” explains Christian Reeber, a welding technician and user of the act/weld software. “The cell’s configuration enables pendulum machining: the robots weld on one station while the back panel is assembled on another station.” To work more quickly, the two robots weld simultaneously when allowed by the part position. The cycle time is roughly 4.5 hours, currently being reduced to 4 hours by optimizing the programs as part of continuous improvement.

Sensing is absolutely vital in order to adjust the virtual program in relation to the real part. “We carry out more than 600 sensing operations on a frame” underlines Christian Reeber. “This is very time-consuming but also necessary to guarantee the quality of the welding on large machine-welded assemblies. Similarly, our experience with the robot and offline programming has enabled us to reduce deformation of parts during welding from 5 or 6 mm to zero!“

Alma helped us develop a simple methodology to program the twin robots, which in principle is not at all easy, and their experience with sensing was also extremely valuable for us.

A collaborative approach to upskilling

Testing, correcting, improving, learning are the key words for the self-learning approach used by the team in charge of robotized welding. “After initial training at Yaskawa on the robot, and then at Alma to learn how to program offline, I worked 2 to 3 hours a day on the software during the summer of 2016. I became independent and capable of creating my own programs” says Christian Reeber. “The first one took me about 3 weeks, but today I’m able to create a new program in 6 or 7 days, although during this optimization phase I still need to make modifications to optimize program quality“. Feedback from the shop floor is also very important, and Christian Reeber always asks operators to tell him about any problems that may have occurred on the robot. “With the welding team, Yaskawa and Alma, we have done a huge amount of adjustment work.”

The technical assistance provided by the Alma project manager throughout the project was highly appreciated by users and managers at TRUMPF. “Alma helped us develop a simple methodology to program the twin robots, which in principle is not at all easy, and their experience with sensing was also extremely valuable for us“, points out Christophe Seibert. “The hot line staff are always available and the remote connection is very practical to use” adds Christian Reeber. “We were also lucky enough to meet other people using the software from EIFFAGE, equipped with more or less the same cell. We learned a great deal in just a few months and were able to build up our own experience in using offline programming software.” The human factor is decisive for the success of this kind of project. The TRUMPF global approach and intelligent project management shows they understand this.

A new robotics cell in production in 2018

After a very positive start for welding laser machine frames, robotization will soon be used to weld punching machine frames.  It is planned to start a new Yaskawa cell in late 2017, and to start mass production early 2018. The selected configuration is based on two robots, each mounted on a 3 axis gantry, without a positioner and in principle they will not operate simultaneously.

Nine products will be welded on the new cell. The frames are much thicker and comprise less parts than the laser machine frames. “They should be simpler to manage in terms of accessibility, and probably easier to program. But we will have to master multi-pass welding for the very thick beads, up to 8 or 10 passes” says Christophe Seibert.

A new Alma offline programming station will be installed and a second person will be trained to use the software. This will absorb the extra workload of programs to develop and optimize. Both programmers will be able to replace each other if necessary and pool their skills. Additional training on offline programming will be provided on this occasion, in particular on multi-pass programming and junctions on corners. Certain points linked to the process, for example, arc starting on an already completed pass, will also be studied in detail. This will give Christian Reeber and his future colleague the status of “absolute experts” in Alma offline programming! 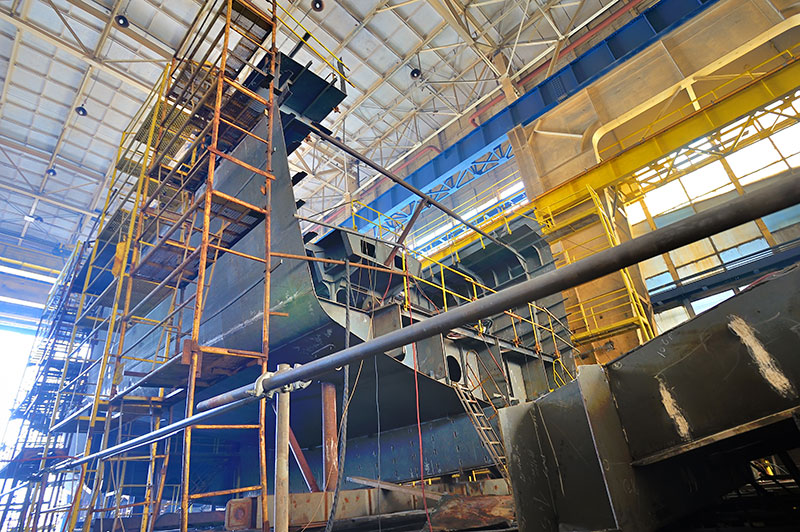