Off-line programming of a welding robot without patch

To be more productive and avoid relocating his production, the Marcel Testaert company based in Arles (Bouches du Rhône – France), manufacturer of metallic moulds for the concrete industry, has invested in a welding robotized cell combined with Alma’s act/weld off-line programming software. One condition is needed to make this investment profitable: the off-line programming software has to free the company from patches on the robot.

Created in 1961 by Marcel Testaert in Arles (Bouches du Rhône – France), the company Marcel Testaert has specialized since 1970 in the manufacturing of metallic moulds for the concrete industry. In 1994, this family company was taken over by M. Bellot who has been working with the firm since 1983. The director reinforced the company’s position in a very competitive sector where customers focus on product durability and price. Present in two-thirds of southern France, the Marcel Testaert company currently employs 16 persons and generates a turnover of 1.275 million euros.

The moulds produced by Marcel Testaert are mechanically-welded sets that are incorporated into the presses used to manufacture bond stones. These products, whose life span is around 100 000 movements, are considered to be consumables by the customers, companies from the public building & works sector that manufacture significant volumes of bond stones, up to several millions of tons every year.

The moulds are all composed of the same elements (a male part and a female part that are slotted together, each coupled to an external case that ensures the connection with the press), but no model is identical because of the many bond-stone profiles and dimensional parameters. That is why, in nearly every case, the moulds are manufactured singly. They are CAD designed from paper plans provided by the customers. The largest part of mould manufacturing is integrated within the company: oxycutting, trimming, decarbonization, machining, assembly, boring and welding. Only the machining of some parts is subcontracted. 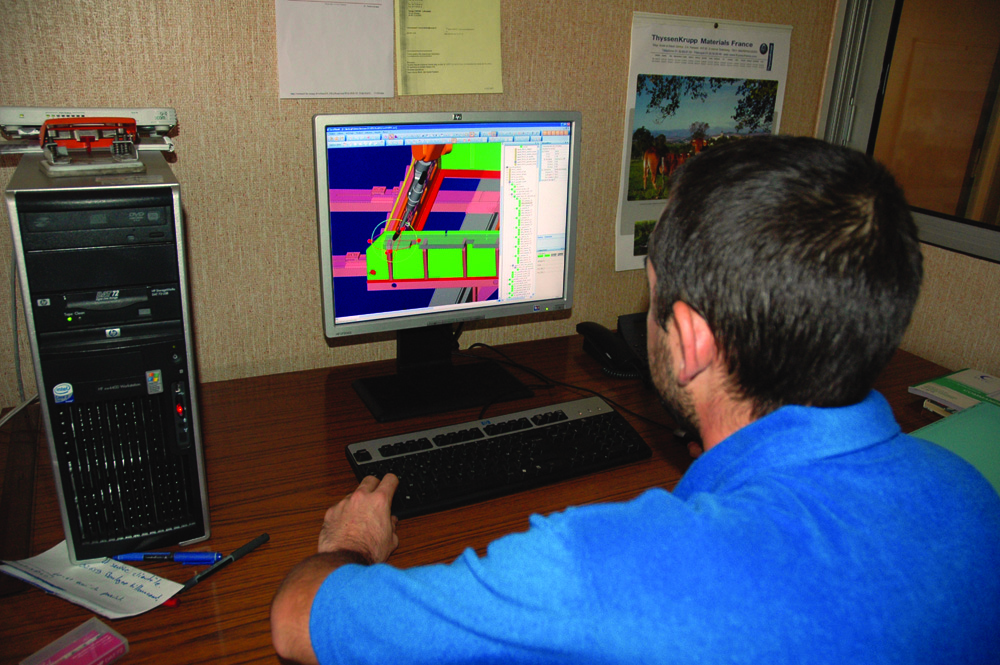 To succeed in this market, Marcel Testaert must manufacture quality products at the best price: it is essential for the company to continuously search for productivity gains. Moreover, it is difficult to hire qualified young welders to replace the generation that is going to retire, and labor costs represent a significant part of the finished-product price. In this context, in 2004 M. Bellot contemplated automation to avoid relocating his production.

Objective: to robotize welding in order to minimize cycle times and reduce manual operations to a minimum. But before investing in a robotized cell, the whole mould assembly method had to be reviewed so that the moulds became “weldable” by the robot. M. Bellot and M. Hugonin, the future robotics and programming manager, worked on this task for 6 months. Two “robotizable” prototypes were designed then manually assembled and welded as they would be by the robot. Convincing results on the robotic integrator’s site and satisfying customer feedback in terms of quality enabled the company to finally validate the assembly method.

The company chose an Air Liquide Welding robotic cell equipped with a Fanuc 6-axis robot mounted on a rail. The possibility of programming the robot by teaching was quickly eliminated as the robot is immobilized during programming, and M. Bellot thought programming is too long. Considering that the manufacturing process is not a serial one, the utilization rate of the robot would really be too low. The profitability of robotic investment is therefore conditioned by the use of off-line programming which should also be able to avoid patches on the robot.

A search on the Internet enabled M. Bellot to discover Alma’s act/weld off-line programming solution. He already knew about the CAM cutting software which he had seen at one of his suppliers, a large company which subcontracts special-steel cutting for other firms. A demonstration was organized and M. Bellot was quickly convinced by the possibilities of the software. Alma also provided the Solid Edge CAD software for mould design and 3D export of assemblies towards act/weld. Perfectly interfaced with act/weld, Solid Edge is a volume CAD that conveniently replaces the surface design software used up to now.

Nicolas Hugonin was trained to use the software during the summer of 2005 (5 days for Solid Edge, 2 three-day sessions for act/weld), the robotized cell was modeled by Alma and the software solution was operational in autumn 2005. The user, who had no specific knowledge of robotics, understood the off-line programming principles very easily. The installation of the robotic cell, early 2006, enabled him to perfectly master the process and operation of the robot he now supervises.

The robotic installation that ensures an accuracy of less than one millimeter enables the technician to weld the external parts of the moulds (the “male” and “female” cases) and the male inside part (or “presser”).

We estimates that with programming by teaching, programming the same assemblies would take at least three times longer, without taking into account the unproductive time during robot immobilization. The robot investment robot would not have been profitable without off-line programming. M. Bellot, Managing Director

Programming, to free oneself from patches on the robot and anticipate production

Once the robotic cell is calibrated (updating of the virtual cell with regard to the genuine cell) and the part assemblies imported from the CAD, off-line programming includes several sequential tasks :

The sensing operation, essential to free oneself from patches on the robot since it enables the robot to continuously reposition itself with regard to the virtual program, is an integral part of off-line programming. Nicolas Hugonin determines the sensing points by seam groups, before and during the welding.If this operation is quick (less than 10% of the total off-line programming time), the user has to be qualified in choosing the right sensing points.

Although he has to create a robot program for each mould to be manufactured, and production launch datesare very short, today Nicolas Hugonin works with a slight advance on the robot. In the most unfavorable case, the welding time / off-line programming time ratio is of 1 to 3, that is to say up to one off-line programming day for some complicated assemblies, for example an external case with 200 welding seams (1900-seams program). But off-line programming is clearly the most profitable way to work. According to the Marcel Testaert company, with programming by teaching, these assemblies would take at least three times longer, without taking into account the unproductive time of robot immobilization. For simpler assemblies to be programmed, notably those for which the program-duplication function can be used, the time spent in off-line programming is clearly inferior to the welding time. This is true for welding programs of inside elements on the “presser” plate, which is a typical case: 45 seams, 45 minutes of welding on the robot compared to less than half an hour with off-line programming.

The “zero patch on the robot” objective was achieved thanks to off-line programming while respecting a few conditions: preliminary software calibration of the cell in act/weld, correct preparation of the part and tooling, systematic sensing and activation of joint follow-up for each seam.

Robotized welding and off-line programming without patch: a successful integration

Nearly one year after the introduction of robotized welding at Marcel Testaert’s, the new equipment is perfectly integrated in the production process: “The robot has been completely accepted by our staff”,M. Bellot is happy to explain.

If productivity gains have not yet been precisely assessed (the initial objective was to improve productivity by 30% with two robots), production has increased to about one mould per day and the time of manual welding operations has been divided by three. And the investment combining robotized cell and off-line programming without patch on the robot enables the company to contemplate an increase of its load without additional fixed costs.

The “zero patch on the robot” objective has been achieved thanks to off-line programming while respecting some conditions:

“The robot investment would not have been profitable without off-line programming”, explains M. Bellot.

Upstream, with the new Solid Edge software, products can be designed more quickly thanks to a parametric and variational technology that allows easy 3D and assembly-mode design.

Lastly, Alma’s expertise and follow-up during the deployment of these new tools has contributed to the success of this automation project. “If we were to launch a new robotized installation, Alma would be part of the venture”, says M. Bellot. Because this pragmatic boss has plenty of projects… 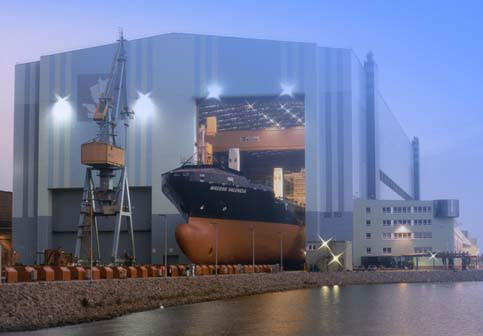 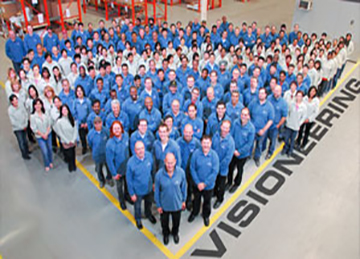 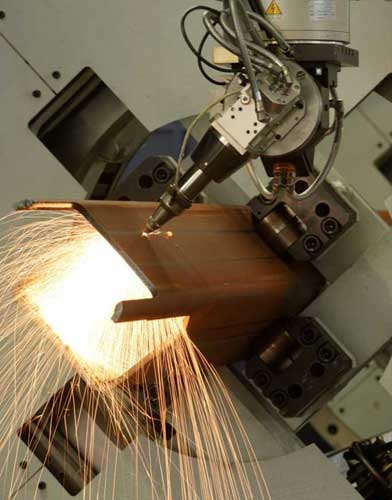